privacyIDEA comes with a great feature: The event handling framework.

So learn more about the unlimited power of the event handling framework and how to use its flexibility to get a privacyIDEA setup, which fits your needs.

When speaking of software or products the term "framework" might raise a connotation of "you have to do it yourself", "things are not ready", "the software is not usable".

A javascript framework can help you to develop cool web front ends. A python framework can be the basis for developing microservices and the framework Qt still requires the developer to develop the real program with the business logic.

When speaking of the Event Handling Framework things might similar: We the developer do not know how you want to use privacyIDEA and thus we give you the biggest flexibility. We have not thought of all possibilities in which you - the administrator - could use this framework! So you can come up with usage scenarios or configuration combinations noone has ever seen before!

But when speaking of the Event Handling Framework things are a bit different: You do not have to be a developer to solve your ideas or have privacyIDEA run the way you want it to.

Using the Event Handling Framework you can get the highest flexibility out of a state of the art authentication server, just by easily configuring rules in an easy web interface.

The basic concept of Event Handlers

Each API request is an event: You can see the full list of all API calls here.

The Event Handling Framework allows the administrator to “attach” new actions to each and every API call/event. It roughly works like this:

Actions are performed by the event handlers. Currently there are three "groups": Notifications, Token actions and scripts.

Roughly speaking the Notification actions will automatically notify administrators or users in case of certain events and if certain conditions apply. Notification can be done via email or SMS.

The administrator can also define that Token actions will happen. These are roughly all actions on tokens you can think of: enable, disable, set description and validity period, set abitrary tokeninfo fields, delete tokens and even enroll new tokens! This is probably the most important handler for automating tasks which e.g. can help large organizations with enrollment processes.

Finally there is the Script Handler, which can trigger shell scripts. The privacyIDEA administrator can write and define any number of shell scripts and thus gets unlimited possibilities. The usual use case we think about might be running backups or cleaning up orphaned tokens. But you will have probably a lot of other ideas. 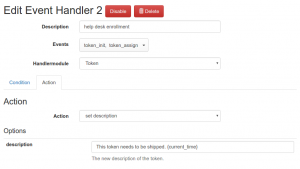 Some of these examples might occur to you a bit far fetched. But after all these are examples of what is possible. So you may come up with your own scenarios which very probably will also work out nicely.

Notify the user in case his password is breached

This can be combined with the condition of the tokentype. The tokentype is only known (and thus only the event handler will trigger) if the OTP PIN a.k.a. static password of the user is correct. Thus the user gets notified if someone guessed or sniffed his static password but fails at the second factor.

The condition contains the tokentype. The event will only trigger if the used token is an HOTP or TOTP token.[/caption]

If for any reason you need a token, that the user is only allowed to use for a limited time. E.g. the user would only be allowed to login 100 times. 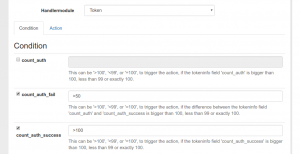 Disable a token, that was used too often.[/caption]

Starting with privacyIDEA 2.20 (currently under development) you can also use timestamp tags in the tokeninfo condition and settings. I.e. if one event occurs, the token event handler can use the "set tokeninfo" to set additional information like tokeninfo key=locked and tokeninfo value={now}. The tag "now" will be converted to the current timestamp. This action could be called on a failed authentication request. You could also mark the token for any other reason. 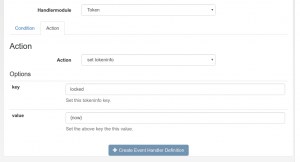 Mark the token with the current timestamp.[/caption]

A second event handler can check for this timestamp. I.e. the condition can verify if the timestamp is past - lets say - one week/7 days. In this case a second action like unlocking the token can be performed.

Check if the locked timestamp is newer than 7 days old.[/caption]

This can be achieved by using the tokeninfo condition. This check can also check strings, integers and dates for being less, equal or greater. This helps to easily automate many tedious tasks.

The online documentation should contain the full developer view of the event handlers.

privacyIDEA is based on the python framework Flask and uses a lot of decorators to structure code, reduce lines of code and improve testability. The event handler adds one decorator "@event". E.g. this decorator decorates the endpoint "/validate/check".

The decorator takes care of registering this endpoint in the event handler framework but also calling possible actions.

Each event handler (Notification, Token Handler, Scripts) is a python Class, that inherits from the Base Handler. Each handler could define its own conditions and its own actions and thus can work self-contained and add any functionality to privacyIDEA.

This is done in the main function “do” of the event handler.

Adding event handler definitions is a matter of a few clicks for the administrator. But it is a great step for the automation of your privacyIDEA installation.

Adding a new event handler class is also only a matter of inheriting the base handler class and starting with woughly 50 lines of code. The hardest thing is to come up with a new idea! But the only limit is your imagination!